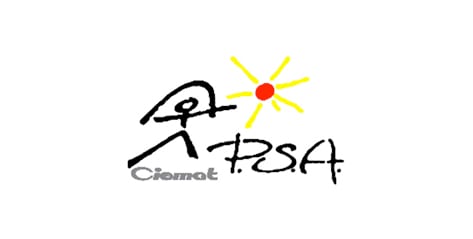 CIEMAT is a Spanish public research institution assigned to the Ministry of Science and Universities (www.ciemat.es). Since its establishment in 1951, it has developed and led R&D projects in the fields of energy, environment and technology, placing the institution at the forefront of science and technology research. Its activities include the promotion, introduction and improvement of renewable energies on the energy market, as well as the promotion of technology transfer, training and scientific outreach. With 1,342 employees, CIEMAT has a strong presence at international scientific and technological fora. As well as its headquarters and laboratories in Madrid, CIEMAT owns several additional research centres in Spain. One of these centres – Plataforma Solar de Almería, PSA, (www.psa.es), located in southern Spain – is formally considered a European Large Scientific Installation, and is the largest R&D centre in the world for solar thermal concentrating systems (research, development, and testing of concentrating solar thermal technologies). With a large and long-lasting international collaboration with many other R&D centres and industries, their objectives are to contribute to the establishment of a sustainable and clean energy supply worldwide, as well as the technical and scientific promotion of solar thermal technologies and derived solar chemical processes, to contribute to the development of a competitive solar thermal industry.
More info >