For the second time since the WATER-MINING project launched two years ago, the entire consortium met during a three-day conference from 19-21 Sept. 2022 in Palermo, Italy.  Representatives from 38 partners across 12 countries gathered to discuss the project’s progress and this critical turning point in the project’s life since it has two more years to go. The conference also included a visit to a case-study site located in Lampedusa, Italy.

The WATER-MINING project consists of a wide variety of partnerships between scientists, organizations, and local partners. Collaboration is key for obtaining relevant results in EU-funded research projects. The WATER-MINING project used a combination of technology, face-to-face meetings, co-participatory workshops, and inspirational presentations to fully engage participants and boost interaction during the third General Assembly in September held at the facilities of the University of Palermo.

During the first two days of the assembly, organizers planned workshops targeting different topics within the WATER-MINING project. The workshops included project updates and preparatory explanations related to research, policy and business models, and communication and dissemination actions. During the first day, collaborative workshops discussed the specific constraints and challenges each case study is facing when implementing their methodologies. Experts then offered partners the possibility to propose potential solutions. On the second day, WP9 and WP10 leaders presented an introduction to the project’s business models and discussed how to apply the models to resource recovery, resources reuse, and waste production. Finally, WP11 prepared a session that included an inspirational presentation by REVOLVE  founder Stuart Reigeluth about the importance of communication. Afterward, partners were challenged to use new forms of media to reach audiences. 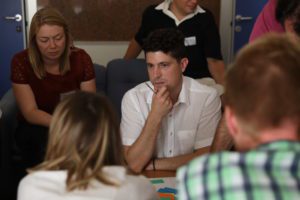 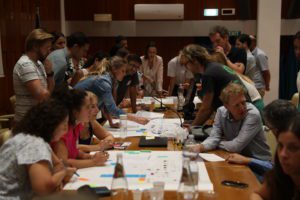 During the conference several innovative dissemination actions were presented. One innovation includes the use of augmented reality technology. Researchers say the technology can play an important role in engaging and educating a larger audience on the circular economy of water use. The use of those technologies can bring a visual aid to help audiences understand complex topics within the water management sector. Dimitra Tsiakou from ICCS presented an initial version of CirculAR, the app that her team is developing within the WATER-MINING project. The app is designed to help users see and interact with the circular economy water use. Developers programmed the app to adapt to the University of Palermo facilities so project partners could test it themselves. Other relevant dissemination actions that were presented during the meeting included the NEMO, SciCo, and Parque de la Ciencias citizen engagement dialogue workshop activities planned this fall in the Netherlands, Cyprus, Greece, and Spain. NEMO will also open a modular exhibition at the Science Museum of Amsterdam during the coming weeks, which will move in spring 2023 to Parque de las Ciencias in Granada, Spain. 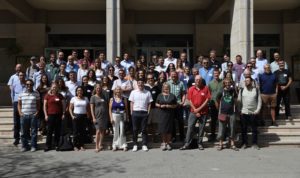 Participants in the 3rd WATER-MINING General Assembly pose for a photo. Source: REVOLVE

Near the end of the conference, organizers planned a field visit to show partners the project’s first case study, located in Lampedusa, Italy. Members were welcomed by the Adviser to the Mayor of the island for Health, Family and Technological Innovation, Dr. Aldo Di Piazza. Lampedusa is a 20-square-kilometer island located in the Mediterranean between Sicily and Tunisia. The island’s population completely depends on a desalination process powered by a diesel power station to access drinkable water. “Lampedusa does not have its own freshwater natural sources and relies on the local electricity plant for energy,” explained Giorgio Micale from the University of Palermo, who is responsible for implementing the island’s case study. “Desalination is the only way to obtain water, but it requires a lot of energy and creates a very concentrated salt water that has an environmental impact on the surrounding coastal area. The technology developed within the WATER-MINING project will take desalination to the next sustainability level, reducing its energy, financial, and environmental costs.” The collaboration between research and private water suppliers is key to improving the desalination process and decreasing its dependency on fossil fuels. “At Lampedusa, we want to be a flagship frontrunner of the energy transition,” said Angelo Catania, Desalination Plant Manager at SELIS, owner of the Lampedusa desalination plant. “Our collaboration with the WATER-MINING project is helping us to develop a technology able to reuse some of the heat produced for the process and also obtain recovered materials. Our plant can currently reach a total production of 3500 m3 of freshwater per day and we do hope in the near future we can produce it using only sustainable sources of energy,” Catania explained. At the moment, the project installed a large-scale demonstration site next to the desalination plant. This site is now able to produce 50 m3 of freshwater per day. Its production requires half the energy as the typical process because the heat generated is reused and it recovers valuable byproducts like salts and minerals from brine, which is the high-salt concentrated liquid resulting from the desalination process.

Images of the field visit to the demonstration site in Lampedusa. Source: Nicole Heine (left) and REVOLVE (right).

The energy-saving measures also reduce the process’s total economic cost. Executive Project Coordinator Dr. Dimitris Xevgenos, from TU Delft in the Netherlands, invites any interested actors to visit the site. “It is the first time that this process can be seen at a pre-commercial scale. People can taste this high-quality freshwater and touch the marketable products. See with their own eyes that it works. And most important they can understand that what we are developing within WATER-MINING in Lampedusa is also implementable in other arid and semi-arid islands and regions of the Mediterranean.” The demonstration site will remain in Lampedusa until the end of December 2022. Anyone interested in visiting the facilities can contact the local project partners.