The Institute of Communications and Computer Systems of Athens (ICCS) represented the WATER-MINING project last month at the Athens Science Festival from the 21 to 23 of October. More than 5.500 visitors showed up at the festival over the weekend. During the event, ICCS used its Augmented Reality (AR) tool to engage students in activities related to sea, industry, and urban mining. ICCS used information from three case studies (CS2, CS4, and CS5) to teach students about water circularity and technical, environmental, and economic indicators associated with the specific demo sites. 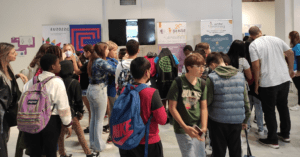 The ICCS team  at the Athens Science Festival (left, from left to right: T. Katika, O. Sampson, D. Tsiakou and S. Bolierakis) and the students around the stand (right)

CirculAR is a tool designed to help users visualize the circular economy water use. For this event, ICCS created a WATER-MINING treasure hunt game for users and with its virtual assistant “Aris,” the institute helped educate students, families, scientists and academics who attended the event on specific WATER-MINING activities. During the AR program, participants answered quiz questions and completed object recognition features to learn and ensure a more immersive experience. Feedback was continuously gathered during the three-day science festival and will be used for fine-tuning of the AR app. The exhibition, presented with the support of REVOLVE, DECHEMA, EXCITE, and SciCo, was overall a successful interactive activity that introduced thousands of people to innovative WATER-MINING concepts.

Since the science festival’s introduction to Athens in 2014, it has collaborated with more than 6.000 scientific associates, 730 speakers, 350 artists, and 1.800 volunteers. The festival has a major social impact, as it has reached out to more than 120.000 visitors over the past six years. The first day of the festival this year alone attracted more than 2.000 students. The festival is considered one of the largest science and technology festivals in Greece.